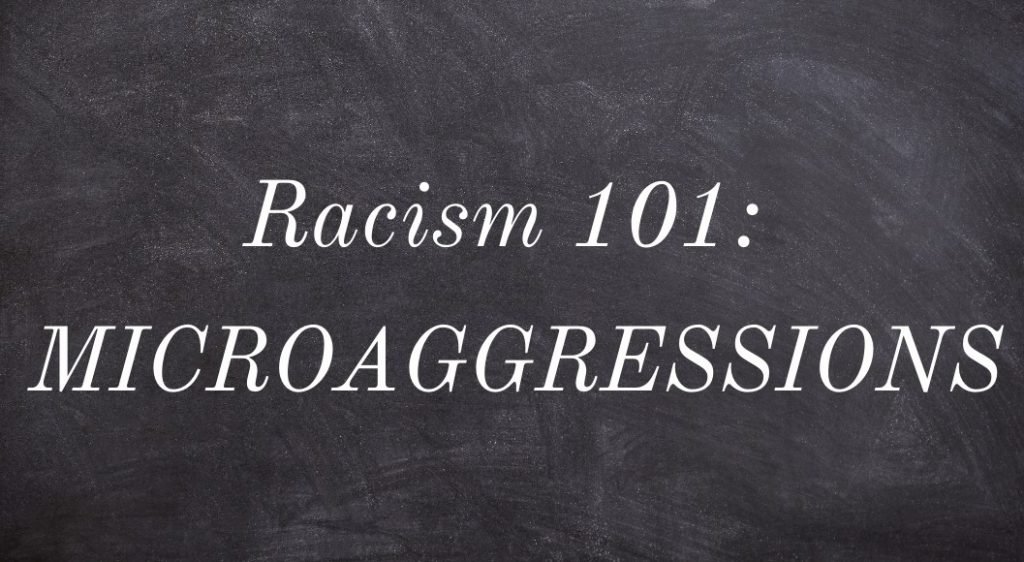 I still remember precisely where I was standing (in the hallway of the Fortune 500 company where I worked at the time) when one of my cis-het white male colleagues said to me, à propos of absolutely nothing: “Lisa, I have to tell you, you’re so well-spoken.” My brow furrowed in puzzlement. “Um…thank you?”, I replied, the rising inflection of my voice and tilt of my head communicating my confusion.

“What had brought about this declaration?”, I wondered silently. On the surface, I continued the conversation in my best professionally code-switched voice, but inside I was, frankly, irritated. Because once again I had been “gifted” with one of those insults masquerading (albeit ineffectively) as a compliment.  Once again I would have to self-soothe, take a deep breath, and carry on working with a racist. Once again—it happens almost daily to most people of color—I had been subjected to a racial microaggression.

So what exactly are microaggressions, you ask?

“Microaggressions are the everyday verbal, nonverbal, and environmental slights, snubs, or insults, whether intentional or unintentional, which communicate hostile, derogatory, or negative messages to target persons based solely upon their marginalized group membership.”

An important nuance is that “micro” refers to the (mis)behaviors occurring in one-to-one situations, as opposed to on a “macro” or systemic level. Micro does not mean that the behaviors are unimportant, or miniscule in their impact.

Part of what makes microaggressions so toxic is their subtlety. People sometimes have difficulty in recognizing—or admitting—that a microaggression has taken place. And it’s hard to address what is not confessed.

Here are some examples of what microassaults, microinsults, and microinvalidations look like in real life:

Microinsults are discriminatory comments or actions that are often, though not necessarily, unintentional.

Microinvalidations undermine or negate the experiences of marginalized people.

Theory aside, it will come as no surprise to any person of color reading this that I have been micro-aggressed more times than I can remember. All Black people have. Here are just a few of my personal examples:

This is not a definitive list, of course, but I hope it provide some fodder for your mind to chew on. Again: we can’t address what is not confessed. So get honest with yourself, and do better.

Stay tuned for part 2, where I’ll provide tips for how to commit fewer microaggressions, and how to effectively respond when they occur.