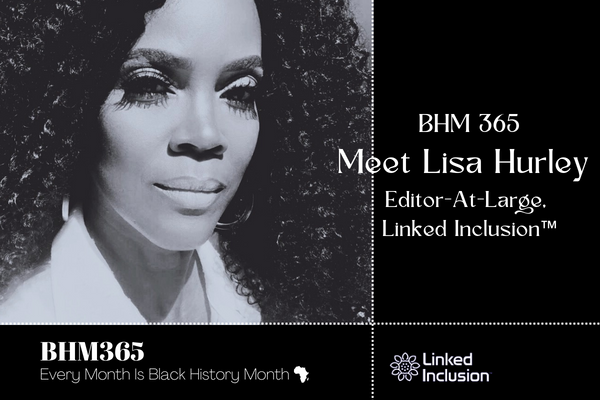 Contrary to popular belief, Black History is not limited to one month. Black excellence, achievement, and progress are all day everyday realities. Also: Black History is…history. In that spirit, here at Linked Inclusion™ we’re celebrating what we’ve dubbed BHM365. Because every day we are making history; because every month is Black History Month.

For the rest of the year, and beyond, we’ll be highlighting historical figures and current change-makers from the culture. We’re kicking off BHM365, (and also celebrating Women’s History Month) with a focus close to home, by interviewing our very own Editor-at-Large, Lisa Hurley.

How did you get started? What or who inspired you?

In terms of my writing, I have always been drawn to the written word. Like most writers, I began as an avid reader. I composed my first poem at around age 5, and kept going from there. I was – and am – inspired by my mother, who is a lifelong creative, and my sister, who is also a writer.

In terms of my activism, I started after the brutal murder of George Floyd at the hands of police. I could no longer stay silent about all the wrongs and systems that adversely affect my community. As a writer, it made sense to deploy my words and my keyboard as vehicles to advocate for change.

There is no such thing as an overnight success. How long has it taken you to reach to this point? What have been some of your struggles along the way?

The path of life is not linear. Neither is the path to “success.” I still don’t feel as though I’ve made it (I’m not sure if I ever will), but there are some signs that elevation is in progress, so I am grateful. It has taken me decades, as well as many delays, doubts, and divine redirections. Struggle, to varying degrees, is a part of the journey. Some of my struggles have included combating racism in the workplace, and dealing with invisible illnesses.

As regards the first: Black women typically do not receive opportunities, sponsorship, or adequate pay. We are often perceived as inherently inferior, incapable, and aggressive. I have many times been actively obstructed and micro-aggressed by white people, and non-Black people of color. As relates to the second: it is believed that Black people, and especially Black women, do not experience pain to the same degree as non-Black people. As a spoonie, not only am I affected by physical symptoms, but I am also emotionally impacted by people dismissing the severity of my symptoms, or not believing that I am feeling unwell.

Have you encountered racism in your career, and if so, how have you dealt with it?

I have encountered racism more times than I care to remember. Systemic racism is a murky ocean in which we’re all swimming, so it is actually impossible to avoid being affected by it. Microaggressions are probably the most common way that racism manifests in the workplace. On multiple occasions I have had people attempt to touch my hair, and been told how articulate I am. I have had my accomplishments denied, diminished, and disrespected. At one company with an employee shuttle, I have also literally been told to sit at the back of the bus, whereas others were welcome to sit at the front.

How I deal with racism varies. Since I am often “the only” on any team, I now simply decline to participate in harmful interactions. I refuse to be anyone’s token Black friend. I refuse to be “the voice” for all Black people. I refuse to educate on Google-able topics. I refuse to engage in “thoughts and prayers” discussions with so-called allies when egregious events, from the murder of George Floyd to the abuse of Child Q, take place. I decline.

On the flip side, I speak out much more than I used to, advocating for myself and others. Giving voice, rather than keeping silent, is one of the ways in which I cope.

What are your proudest achievements so far, personally and professionally?

Personally, my proudest achievements are my relationships with my people: my Mom, sister, best friend, fur baby, and others with whom I am close. When it all comes down to it, this is what matters most. Though I am mostly known (I use the term loosely, lol) as a writer, activist, and podcaster, I also have a deep love of fashion. As a result of participating in the last pre-pandemic Afropunk festival, I have been featured on Essence, Refinery 29, Teen Vogue, and Afropunk.com. And the little girl from Barbados who still lives inside me will never not be thrilled at having been featured on the big screen in Times Square, New York City.

Professionally, I have stepped more fully into my purpose as an activist. I am blessed to have been quoted and featured in Forbes and Fast Company, as well as on Business Africa Online, Black Books, Black Minds, Bukzone.com, and the Black Power Moves podcast.

This year has already been big! I am part of the Linked Inclusion team that won three Anthem Awards (woot, woot!!). This is a huge sign that the work we are doing is resonating, and that we are collectively on the right path.

In addition, I was previously a guest on Real Talk on Racism, and they have now invited me to be one of the hosts! I already have a few interviews lined up, and I’m excited to start my journey on TV.

What do you consider to be your biggest contribution to the culture?

Everywhere I go, I rep Barbados. And as a result of my Bajan education and upbringing, everything I do is steeped in excellence. I have never lost my accent, nor do I ever plan to, so a part of my contribution is to help change the way that people who speak like me are perceived. Therefore, I can and do absolutely use “Bajan dialek” in “professional spaces,” because my accent, lexicon, and linguistic decisions are professional. Periodt. By refusing to code switch, I am advocating for the culture.

Additionally, I am also what one might call a hair texture activist, as well as an advocate for rest. I actively push back against notions of “professional hair”. I actively resist the Strong Black Woman stereotype. I am categorically not anyone’s strong Black woman. So my contributions include using my platforms to spread the word that Black people – and especially Black women – deserve to be celebrated for the same features and hairstyles that other communities appropriate. We deserve to exist in luxury. We deserve grace. We deserve peace. We deserve care. We deserve to be pampered, supported, and very well rested.

Finally, in collaboration with my sister Sharon Hurley Hall, I help to shine a light on introversion as it intersects with our lived experiences as Black women. Many Black women are stereotyped as loud. Many workplaces are geared towards extroverts. Through our podcast The Introvert Sisters, we let it be known that Black women are not a monolith, and that there are plenty of quiet, introverted Black girls in the world—who need safe, silent spaces in which to thrive.

Name someone from Black history and culture who inspires you.

There are many on my list, but I’ll have to go with Maya Angelou. She was an iconic poet, author, activist, and dancer who lived life fully and beautifully. Of course, her autobiography, I Know Why The Caged Bird Sings is one of my favorite books of all time. She has made such an impact that she was honored with the Presidential Medal of Freedom by President Barack Obama, and was also recently immortalized on U.S. quarters.

Have you ever felt like you are our ancestors’ wildest dreams come true? Tell us more.

I’m not totally there yet, but I definitely feel as though I’m making some of the ancestors happy. I feel their support, and I am grateful for it.

What is some advice that you wished someone had shared with you when you were starting out?

Wow. So many things spring to mind. The main one is: “Things will not go as planned, and that is ok.”

I also wish that I had been told:

Would you consider yourself and your achievements to be Black History in the Making?

Absolutely. Coming from a tiny island and starting to make a big impact is not easy to do. Being quoted and featured in publications of record; being sought out as an expert; leading conversations that are helping to change minds and lives…I am adding to the narrative that is being written. I am Black History in the Making—and I’m proud of that.

What’s next for you?

The work continues. The goal is expansion. I am looking forward to doing more, going further, and building a bigger platform. Among other things, I plan to expand my focus to encompass specific messaging and advocacy around the importance of inclusion. I can’t get into specifics yet, but believe me: big tings a gwan!

*This article first appeared on Linked Inclusion. Want to see more? Join us!

Lisa Hurley is a Barbadian writer, speaker, and activist whose work focuses on anti-racism, texturism, and destigmatizing introversion. She is also a passionate advocate for inclusion, equity, and gender equality. Ms. Hurley is the Editor-At-Large of Linked Inclusion™, a host & producer of Real Talk on Racism, co-host of The Introvert Sisters podcast, a member of the Black Speakers Collection, and a Contributing Writer for No White Saviors.

As a result of her activism, Ms. Hurley has been featured and quoted in Forbes, Essence, Fast Company, Business Africa Online, Teen Vogue, Elle, and on Ebony’s Black Power Moves podcast.  She has also been featured on the Nasdaq screen in Times Square New York, and honored as one of pocstock’s Future of Black America Top 50 Leaders.

Lisa is always interested in sharing meaningful conversations! Feel free to connect with her on social media.